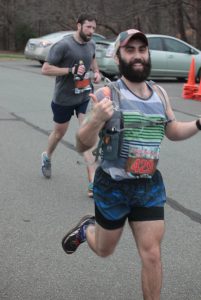 While navigating civilian life again, Collin Yarborough continued to receive phone calls that no veteran ever wants to get. Calls that yet another friend he served alongside had taken his/her own life. Unsure of how to cope with the news, Yarborough turned to running. Finding HOPE when his shoes met the trail, he decided to use his endurance, mental and physical strength from being an ultra-marathon runner to bring awareness to the psychological issues veterans face during his/her transition into civilian life.

Starting on June 1, the Marine Corps veteran will embark on a 110-mile journey from Greensboro to Pilot Mountain, North Carolina. With a goal of 22 miles a day, for five days. Yarbrough is symbolizing the 22 veterans that take their own lives each day. With HOPE of never receiving those heartbreaking phone calls again, he will be sharing the HOPE he found in running with his fellow veterans who volunteered to run different lengths of his journey with him.

The Siler City, North Carolina native entered the Marine Corps in 2011 and trained as an infantryman deploying with 2nd Battalion, 8th Marines to Afghanistan in 2013. After transitioning from the Marine Corps in October of 2015, Yarborough went onto pursue a bachelor’s degree from University of North Carolina Greensboro in therapeutic recreation with an expected graduation date of Fall 2019. Upon graduation, he will be seeking a job as a recreation therapist with dreams of specializing in adaptive sports. He also wants to pursue a master’s in occupational therapy.

Yarborough will be donating 100 percent of the proceeds raised during this journey back to Hope For The Warriors programs that assist veterans and military families during their life transitions through clinical health and wellness, transition services, and sports and recreation. Click here to make a donation.