Above & Beyond Program: A Success Story 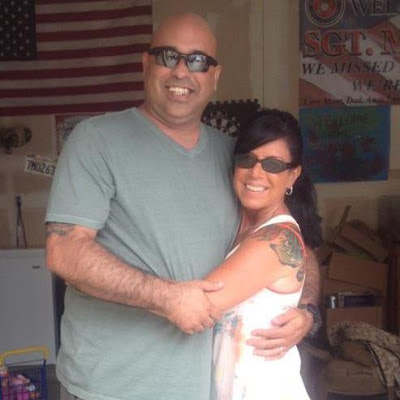 Today’s blog is written by Blaz, a veteran and a Marine who has both benefited from, and volunteered to support, Hope For The Warriors® programs.  By sharing his story, we hope that others reach out for help, and to help.
“Shortly after Operation Desert
Shield/Storm, I started to have many symptoms that affected my health.  Many I just ignored like the asthma, extreme
headaches, feeling dizzy and always feeling nauseated. But eventually, my wife
Theresa started noticing gashes on my face, caused from my falling down.  Theresa knew this was not normal so off to
the doctors we went.”
“After many MRI’s and numerous visits
to the doctors, it was discovered that there were masses growing on my
brain.  The decision was made that I
would undergo brain surgery to remove the mass.
However, the neurosurgeon only drained the mass.  The mass was pressing on my pituitary which
was causing me to lose my balance and fall over.  Within a few months the mass came back even
bigger and that is when my health started to go downhill from there.”
“I was transferred to the Wounded
Warrior Battalion East in early 2007 since I could no longer function within an
infantry unit.  My Traumatic Brain Injury
was finally catching up to me after all these years since the blast.  The only thing left for me to do was to be
medically retired from the Marine Corps, something that I have never planned
on.  In 2007, the Wounded Warrior
Battalion was introduced to an organization called Hope For The Warriors®.  This was a new nonprofit establishment to
help the wounded warriors and their families.
Hope For The Warriors® was there for my family and me until my
retirement in December 2008.”
“When I retired, I hit rock
bottom.  I drank from the moment I got up
and would not stop until the alcohol was gone or I passed out.  I would not shower or shave for weeks, wearing
the same clothes night and day, in most cases my bathrobe.  I ate junk food all day and would not even
leave the house.  My wife could see me
slipping away from reality and there was nothing that she could do.  One day, my wife told me that I should go
back to school.”
“This was a great idea since no one
wanted to hire me without some sort of education.  But college really scared me since I did not
do very well in high school.  So I
started attending college on line and I made the Dean’s List.  This was a huge accomplishment for me since
studying and reading is a challenge for someone who has a TBI.  I was trying to get my BA in Business
Management and after four years and eleven times on the Dean’s List, I
graduated with honors as Magnum Cum Laude by maintaining a GPA of 3.85.”
“The depression was still there and at
this point I became more frustrated that no one wanted to hire me.  Hundreds of applications had been filled out
online, in person and through the mail only to be told that I do not meet the
requirements.  The drinking started up
again too.”
“One day the phone range.  It was someone from Hope For The Warriors®,
asking if I wanted to go to New York.
This put a smile on my face since they had done so much for all the wounded
warriors and their families.  Not only
was I going on a vacation to New York City, but I would once again be in charge
of about a dozen wounded warriors.  Things
started to look bright and the depression was slowly leaving my unhealthy body.”
“Hope For The Warriors® called upon me
again, but this time it was to go through the Above & Beyond Program.  WOW, what an amazing program! The Above &
Beyond Program taught me how to dress for an interview, how to put out a resume
that no one could say no to.  It prepared
me for job interviews and helped me build new contacts. Business owners would
talk to us, telling us wounded warriors what they look for when it comes to
hiring.  The people that I met were professionals,
teachers, mentors, and I would like to also add friends.  Nessy, Connie Morinello, Chris Hansel and
many others made the Above & Beyond Program such a huge success.”
“In March 2012, I was hired at NAVSEA.  Captain Eric Ver Hage gave me my start as a
civilian government employee, something that I have wanted for more than 4
years.  I also started working towards my
Masters in Public Administration and have kept on with the tradition of being
on the Dean’s List.  This time I kept my
GPA at a 4.0 and will be graduating as Suma Cum Laude.  Both degrees were a struggle; I would re-read
things 5-10 times.  I would spend hours
just trying to figure out what the teacher wanted.  My wife Theresa would see my frustration so
she would ask me to read the question.  Then
she would break it down so I would understand the question better.  Once she did this, off I went typing my huge
papers.  There were many days I just
didn’t feel well with all my health issues but I managed to complete my
assignments.”

“The day that Hope For The Warriors® came back
into my life was the day my wife and I started to promote this great organization.  Anything that Hope For The Warriors® needed, my
wife and I were there waiting to help.
You know that you have come full circle when you show up for an Above &
Beyond Program as guest speakers and a lovely lady started to cry.  That would be Nessy–she had faith that I
would finally make it.  Hope For The
Warriors® and the Above & Beyond Program have truly saved my life.  If it was not for their beliefs, their
guidance, their contacts, I am sure I would still be in the depths of hell,
dealing with my depression.  I am also
grateful to have such an amazing wife who never gave up on me.  I owe my wife everything and I guess this is
what true friendship is all about.  My
wife Theresa has been with me through all the doctors’ visits, all the
surgeries, all the depression and anger; it is her motivation and dedication
that gives truth to the meaning of Care Giver.”

Hope For The Warriors® has another Above & Beyond Seminar scheduled and we are looking for volunteers to support service members and veterans as they transition into a new civilian career.

Volunteers are needed to help with writing resumes and conducting
mock interview sessions for a group of transitioning Marines/Sailors from the
Balboa Medical Ctr in San Diego.  September 25 from
8AM-4PM.  Contact Connie at cmorinello@hopeforthewarriors.org
for details.  Local volunteers only please.
Facebook0Tweet0LinkedIn0Print0Email0