A Warrior’s Wish®: Sometimes, the Grass is Greener 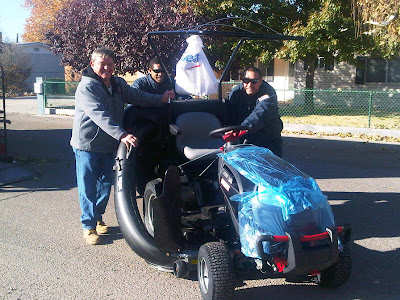 Master Sgt. Jessey Baca has served his country since 1977.
Throughout his many years in the United Sates Navy and the National Guard, he
has accumulated combat related illnesses. Just as he has served his country for
so many years, he wishes to continue to serve and care for his family. Jessey
knows firsthand how important it is to spend time with his wife of 34 years,
their children and grandchildren.  And
sometimes caring for them means taking care of something as simple as mowing
the lawn. While mowing the lawn may not seem like a big task to most people,
Jessey is not most people.

During all of his years in the
military, Jessey has deployed overseas four times.  Twice for Operation Southern Watch, in 1996
to Kuwait and to Turkey in 1997.  He also
deployed to Iraq twice, in 2004 and then again in 2007-2008.  In all four deployments, Jessey was exposed
to toxic fumes from oil and burn pit fires.

Due to this exposure, he has been diagnosed with emphysema,
chronic bronchitis, chemically-induced asthma, mesothelial hyperplasia, PTSD,
fibrosis, hearing loss, memory loss and skin cancer. And with that diagnosis,
not only does he continue to serve his family, he is still also serving in the
military. Our thought was that there could be no one more deserving of a gift,
than this man.
Five years ago, he was given 7-10 years to live. 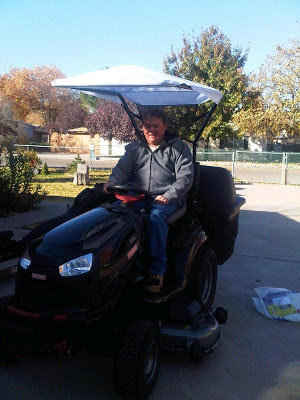 Since his diagnosis, life has changed for Jessey. For years,
his yard was a source of pride. He enjoyed all the duties that went in to
taking care of his yard, his home, and his family. But due to his illness, what
once took a few hours, now takes days to complete. Jessey and his family
submitted a Wish to the A Warrior’s Wish® Program, so that he could help make
the home duties he loves, a little easier.
Through the A Warrior’s Wish® Program, the Baca family Wish
has been granted. The Wish included a Craftsman Riding Lawn Mower, along with
accessories to help him care for the lawn. Due to his skin cancer, the accessories
also included a sunshade to protect him in the sun.
It is a privilege to be able to serve members of the
military who have served our nation for so long. Thank you to Jessey and his
family for their years of service to this nation.  Thank you to supporters of Hope For The
Warriors® for allowing us to grant this Wish, and many more.
Visit the A Warrior’s Wish® webpage to learn more about the
Wish program and to read other Wishes.
FacebookTweetLinkedInPrintEmail