83-year-old veteran’s water stop for cyclists turns into over $50,000 fundraiser for military families 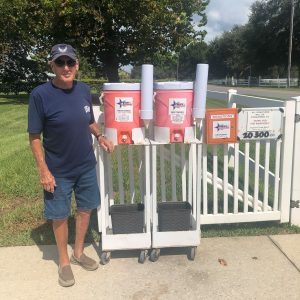 Photo Caption: Since July 2015, U.S. Air Force veteran, Harry Fenstad, has raised over $20,000 for military families through Hope For The Warriors, $50,000 in total for military nonprofits.

What began as a simple act of kindness over two decades ago has endeared Fenstad to legions of cyclists and in the process helped raise over $50,000 for Hope For The Warriors and other military nonprofits.

When Fenstad and his late wife Janice were building their dream home atop Sugar Loaf Mountain in Lake County, Florida in 2001 he noticed a steady stream of cyclists past the construction site. Many, Fenstad observed, were in need of water.

Sugar Loaf Mountain is not a mountain in the truest sense of the word, but the 312-foot ridge is the highest point in Florida and many cyclists use it as part of their training regime.

“Many of the cyclists would have run out of water when they got to the top in front of our house and there wasn’t anywhere for them to replenish for several miles,” said Fenstad, who served in the Air Force from 1963 to 1984 and then became a commercial pilot. “They would stop and ask for water and drink from our hose. So, I set up a water cooler at the end of the driveway.”

And one of the most popular cycling pit stops in Florida was born.

Cyclists immediately wanted to pay Fenstad for his efforts. He turned down those offers until the riders made it impossible.

“They always wanted to give me money I turned that down, said I didn’t want to. They kept asking, though, and one day I went out to check on the cooler and there was a $20 bill under it.”

He sent that $20 to a veteran’s organization, which set in motion his veteran outreach that has continued for more than two decades. He started placing a donation box next to the water cooler and the riders responded generously.

Fenstad says in the past 20 years, riders have donated more than $50,000, which he has passed on to veteran’s nonprofits. For the past six years, those donations, over $20,000, have come to Hope For The Warriors.

For over 15 years, Hope For The Warriors, a national nonprofit, has offered a full cycle of care through its programs focusing on clinical health and wellness, sports and recreation and transition for post-9/11 service members, veterans, military families, caregivers, and families of the fallen.

Several years ago, Fenstad approached the cyclists about raising funds to help purchase a motorized wheelchair for an injured veteran, agreeing to match the amount they raised. They brought in $8,000, Fenstad matched that for a total of $16,000 and the veteran was presented a new wheelchair.

Some weekends Fenstad has to replenish the water cooler a half-dozen times. But even as his 84th birthday approaches, he sees no reason to end his efforts.

“There must be a couple of hundred cyclists coming over the mountain every weekend and most are needing water. I just try to make it as easy as I can for them,” said Fenstad.

He has finally relented and made it a little easier on himself.

“A couple of years ago I fell and fractured my hip. My family convinced me to buy a golf cart to ride back and forth with the cooler.”