More than 20 years ago, a New York City Firefighter was sent to various fire departments out of the state to help train.  The man was Captain John Vigiano, Sr. and one of the men he trained was Dave Smith, a firefighter in Michigan.  The two became close friends and Dave eventually became friends with his sons, John Jr. and Joe, a firefighter with FDNY and a highly decorated member of the NYPD respectively.

On 9/11, John Jr. and Joe died when the towers collapsed.  Dave and other firefighters from Michigan made multiple trips to New York City to help with the search efforts.  It is a loss that still impacts him today.

Dave is the president of the Grand Rapids Warthogs Motorcycle Club.  The group created the Winchester Memorial Poker Run to remember and honor Mike “Chet” Winchester, a prospective chapter member who was killed in a motorcycle accident.  Dave turned to his close friends, John and Jan Vigiano for help in identifying a nonprofit that assisted combat wounded service members and their families. 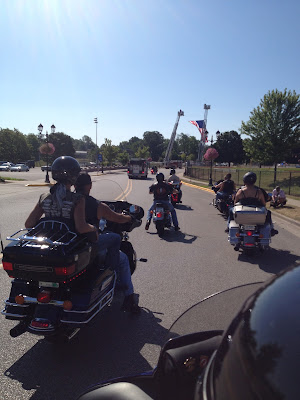 The Vigianos are long time supporters of Hope For The Warriors®.  We thank them, Dave Smith, and all of the members of the Grand Rapids Warthogs M/C for their dedication to the men and women in our military and to their families.  More than $8,000 was raised leading up to and during this year’s Poker Run.

Some of that money was raised through helmets that Dave designed and donated for the auction at this year’s Got Heart, Give Hope® Gala and at the Poker Run.  The helmets are often signed by NASCAR drivers and are one-of-a-kind. 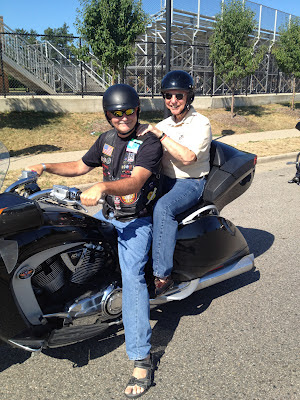 This past weekend, Hope For The Warriors® staff and the Vigianos themselves attended this 5th Annual Winchester Memorial Poker Run.  This year, Dave is retiring from the public service department of Grand Rapids and Hope For The Warriors® staff honored Dave for his years of service as well as his committment to wounded service members. The Vigianos also attended and clearly had a great time with this fun, patriotic group.

Along with the Warthogs, we thank everyone that attended, donated or supported this fundraising event.  This is the fourth year that Hope For The Warriors® has been the beneficiary and we are as thankful today as we were the first year.