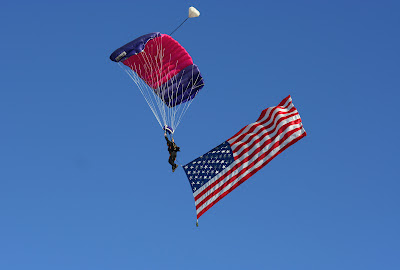 Today we celebrate the 4th of July and in the
heat of the summer, we will celebrate events across the country with fireworks,
barbeques and other celebrations.  As a nonprofit that
supports wounded service members and military families, we become involved in
events that thank our military members for their service—just as they do for
Memorial Day and Veterans Day.

It is important to remember that Independence Day actually
celebrates a moment in history that involved our government, not our
military.  For those rusty on their American History, on July 2, 1776, the
Second Continental Congress voted to become independent from Great
Britain.  The wording of the Declaration of Independence was approved on
July 4.  Historians debate when the document was actually signed and many
believe that it was not until early August.

So why are military members thanked, honored and remembered
on a day that has nothing to do with our military?  The day is to remember
a group of old men, sitting in a building debating over policy.  It does
not actually memorialize a battle victory at all and the Revolutionary War
did not end until 1783.

So now we have to guess why people celebrate our military on
this day.  First, the 4th
of July is about patriotism and love of our country.  No other single
holiday represents the love we have of our country, flag and freedoms than this
day.  Our military members are a perfect example of
patriotism.  Although there are many reasons why men and women join the
military, we believe that each one also has a sense of duty to their country
due to their patriotism.

The second reason is that although July 4th
celebrates a political decision, we have to assume that our Founding Fathers
made this decision based on what they believed could be accomplished on the
battle field.  Shots had already been fired and the colonies were building
up their military, ammunition and political allies.  Our Founding Fathers
voted for independence, knowing that there were men ready to go to battle for
that independence.

Today’s political leaders continue to make their decisions
with this knowledge.  Each United States president is able to enter into
negotiations with the strength of our military behind his words.
Sometimes this power is spoken, often times unspoken.  From these
decisions, our military members are given orders that they must follow.
(Please remember that this November when you are deciding whether you have time
to vote.)

So, have a great 4th of July everyone.  Yes,
we are celebrating a political moment in history.  But that bold political
move was made possible by our military.