10th Annual Hope For The Warriors Invitational Raises over $250,000

JACKSONVILLE, N.C. – The 10th Annual Hope For The Warriors Invitational recently hosted more than 200 guests including service members, veterans, retired flag officer and celebrities, raising awareness and over $250,000 for the national nonprofit. 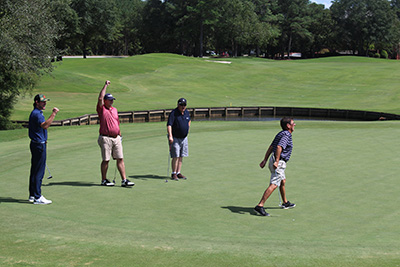 Started aboard Camp Lejeune in 2006, Hope For The Warriors assists veterans, service members and military families with a variety of programming including clinical health and wellness, sports and recreation and transition services.

Featuring a community block party at the Mad Boar, traditional military mess, par three challenge and golf tournament, the event is hosted by World Series Champions Johnny Bench and Doug Flynn with the continued support of the Wallace, North Carolina-based River Landing community and its residents.

“Hurricane Florence hit this community hard and we were concerned how the residents in this amazing community would rebuild their homes,” said Robin Kelleher, co-founder, president/CEO of Hope For The Warriors. “Despite the incredible setbacks, the River Landing community came back in full force and pulled together an incredible experience for the service members, veterans, celebrities and community members that attended this year’s Invitational. We’re forever grateful to River Landing, its staff, the community residents and especially the Murphy family for all that they do to support the veterans, service members and military families that we serve.”

With the continued support of the Murphy family and the River Landing community, the Hope For The Warriors Invitational has raised over $1 million since 2010. This year’s event was made possible by presenting sponsor, Jim McMahon; gold sponsors, Smithfield Foods and Dell; silver sponsors, Aduddell Industries, Frito Lay and Dominion Energy; and bronze sponsors, 800-Pak-Rat, Accro-Met, Inc., Grady Boats, Hog Slat, House of Raeford, Hwy 55, McGuire Woods and Mills Construction.

For more information on the 10th Annual Hope For The Warriors Invitational, visit hopeforthewarriors.org.

Founded in 2006, Hope For The Warriors is a national nonprofit dedicated to restoring a sense of self, family and hope for post 9/11 veterans, service members and military families. Since its inception, Hope For The Warriors has served over 23,200 through a variety of support programs focused on clinical health and wellness, sports and recreation and transition. One of the nonprofit’s first programs, Military Spouse and Caregiver Scholarships, has awarded over 135 scholarships to caregivers and families of the fallen. In addition, Run For The Warriors has captured the hearts of over 25,500 since 2010. For more information, visithopeforthewarriors.org, Facebook, Twitter or Instagram.