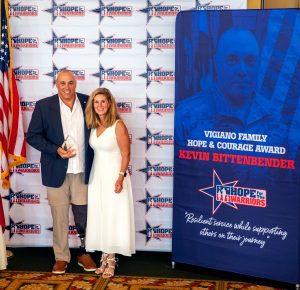 Bittenbender was one of three Vigiano Family Hope and Courage award winners, presented by World Series champion Doug Flynn and TV host John Daly. He was recognized for his service and as a multi-sport athlete who continues to showcase his honor, courage and commitment to our nation, his fellow peers and leadership. Bittenbender is always willing to lend a hand when he is able.

“As an Army veteran, Kevin continues to serve his fellow veterans and those transitioning out of the military,” said Robin Kelleher, Hope For The Warriors co-founder and CEO. “Whether it be by volunteering, honoring his dear friends and comrades he lost while serving or through sharing his story of reaching out for support in hopes of connecting with another veteran in need. Kevin is an inspiration to all.”

“It is an honor and privilege to receive this year’s Vigiano Family Hope and Courage Award,” said Bittenbender. “Hope For The Warriors was introduced to me by my friend (Michael Kacer) and he thought that handcycling would be good for me. I believe he saw the internal struggles I was having and how Hope For The Warriors could help me.

“It was during that time that that I was at my darkest moment and was struggling with being less physically active from my first amputation in my foot. The handcycle gifted to me from Hope For The Warriors provided me with the hope and courage to continue and to look forward to becoming active once again.”

After graduating with a music education degree from Misericordia University, Bittenbender spent 34 years in the U.S. Army after enlisting on a dare from a fraternity brother. They both attended basic training together and both made a career of the military, with his friend retiring one year before him.

Bittenbender deployed twice during his service while also preparing for a third mission that was later scrubbed. First, he left for Wiesbaden, Germany in 2002 as a red cell team to evaluate all European-U.S. bases for Threat Level Protection. He then spent 15 months within Afghanistan as an Embedded Tactical Trainer with the Afghan National Army and Police where he was awarded the Bronze Star Medal and Combat Action Badge and where he first experienced signs of PTSD.

“My deployment started in 2006 in October, and it ran through to 2008 in June. It was probably the most trying deployment where I developed PTSD.”

Today, Bittenbender works for the Department of Justice in Allenwood, Pennsylvania and developed the Bureau Battle Buddy (B3) program. The B3 program focuses on staff wellness and assists deployed servicemen and women with transitioning back into the workforce, deployed employee’s family members and places emphasis on PTSD and suicide prevention.

In addition, Bittenbender co-founded Joint Task Force 22 to Zero which provides resources for those suffering with PTSD and TBI’s as a result from their work in the military, law enforcement and as first responders, EMT’s and dispatchers. He also continues to participate alongside his fellow veterans with veteran service organizations including Hope For The Warriors, Operation Enduring Warrior, Oscar Mike and Freedom Bike.

He is currently the shooting coach for the U.S. Paralympic Biathlon Team and one of the developmental coaches for Biathlon and Nordic Skiing and works part-time as the director of military affairs at Pocono Raceway. A future goal of Bittenbender’s is to compete at the Paralympic level in Skeleton/Bobsled and has attended several camps and the U.S. National Championships placing first in his classification in Bobsled.

This year, Bittenbender passed the National Registry as an emergency medical responder and will be continuing his pursuit of becoming an EMT in the winter. He volunteers his time with the Clinton Township Volunteer Fire Department in Montgomery, Pennsylvania both as a firefighter and EMR.

He continues to honor the memory of his friends and fellow soldiers Maj. Hank Ofeciar, Master Sgt. Scott Ball and Sgt. Jan Argonish through handcycling at least three marathons per year.

“This activity greatly assists me with dealing with my survivor’s guilt, PTSD and physical limitations.   Although there were many obstacles which seem to come our way such as the two years of the pandemic – I continued to handcycle and complete those marathons virtually,” he said.

“Hope For The Warriors better prepared me for my below knee amputation earlier this year and assisted me in completing 2022 April Pittsburgh Marathon on my handcycle just 90-days post-surgery.”

In 2023, Bittenbender hopes to run his first marathon, the Pittsburgh Marathon.

Bittenbender resides in Montgomery, Pennsylvania with his wife, Molly, and daughter, Kaitlyn.

About Hope For The Warriors: Founded in 2006, Hope For The Warriors is a national nonprofit dedicated to restoring a sense of self, family and hope for post-9/11 veterans, service members and military families. Since its inception, Hope For The Warriors has served over 40,000 through a variety of support programs focused on health and wellness, sports and recreation and transition. One of the nonprofit’s first programs, Military Spouse and Caregiver Scholarships, has awarded 192 scholarships to caregivers and families of the fallen. For more information, visit hopeforthewarriors.org, Facebook, Twitter or Instagram.