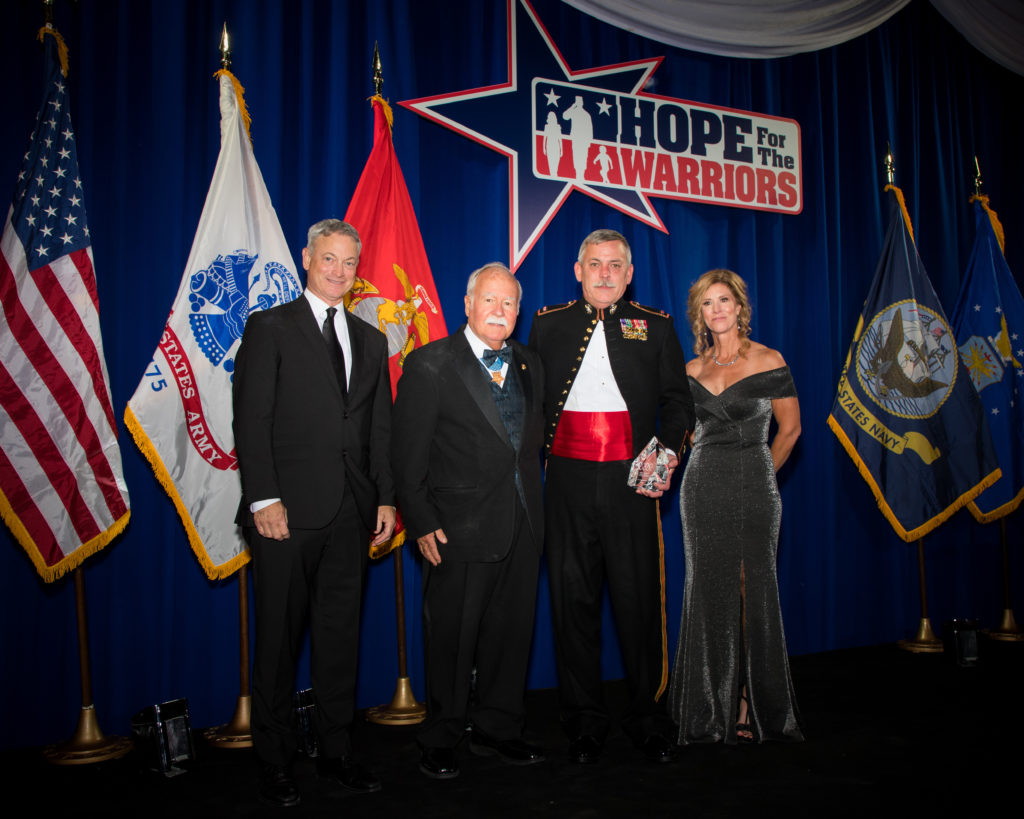 Hedgcorth was one of three Vigiano Family Hope and Courage award winners, presented by award-winning actor/humanitarian Gary Sinise and retired U.S. Marine Col. Barney Barnum Jr. He was recognized for his service and leadership to Hope For The Warriors and his fellow wounded service members.

“I’m honored to be counted among the people who have helped Hope For The Warriors help us,” said Hedgcorth on receiving the Vigiano Family Hope and Courage Award. “Having had the pleasure of meeting John Vigiano Sr., in New York, near the site of the World Trade Center Twin Towers, it’s an even greater honor to receive this award. John and the Vigiano Family have left a ‘legacy of sacrifice for this country’ that I hope to continue to honor by advising Hope For The Warriors and pushing for critical accountability, structure and purpose for wounded service members.

“I was a kid who was in the hospital in Texas, with a new baby and a mother in-law that needed a visa,” said Hedgcorth. “It all happened almost overnight. We were in a place where the Corps hadn’t figured it out. That’s the gap Hope For The Warriors was filling, gaps the Department of Defense couldn’t,” he added.

Growing up in a military family it didn’t take a lot of convincing to push the Rhode Island native to join the U.S. Marines after high school. Hedgcorth served for 26 years, with deployments in Panama, Operation Desert Storm, the Balkans and Iraq. Sidelined from combat in 2004 by a shrapnel injury to his knee, he continued to use this injury as a catalyst for his passion of providing the best possible care to wounded service members by working as the operations officer for the Wounded Warrior Battalion East and as an advisor to Hope For The Warriors.

“When Hope For The Warriors first formed aboard Camp Lejeune, Chief Warrant Officer 4 Hedgcorth played a huge role in advising us on exactly what wounded service members and their families needed,” said Robin Kelleher, Hope For The Warriors co-founder and CEO. “On top of that critical advice, he was also there to assist and support as we launched our first fundraising event, Run For The Warriors, and continues to provide support and advice more than 13 years later.”

About Got Heart Give Hope Gala:

Since 2010, the Hope and Courage Awards have been presented to service members and military family members who have demonstrated both hope and courage in the face of extraordinary circumstances. Named in honor of the Vigiano family, Captain John Vigiano, Sr., retired FDNY, and his wife, Jan, gave both of their sons on 9/11—one served as a fire fighter and the other served as a police officer in New York City. The Vigiano family has continued to serve by supporting service members and military families. In celebration of the event’s 10th year, six new awards were introduced highlighting individuals, corporations and organizations who have stood beside the organization in serving military families.