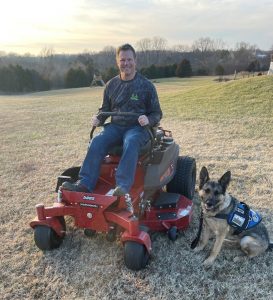 U.S. Marine veteran Justin Singleton and his service dog, Maddie Rose, with his riding mower courtesy of Hope For The Warriors and its Warrior’s Wish program.

CHARLESTOWN, Ind. (Jan. 24, 2023) – Outside of his family, Justin Singleton has another joyful outlet in life: mowing the grass.

For many, that would sound odd, but for the 20-year veteran of the Marine Corps, it’s his escape time, time to listen to music or an audio book and disengage from work and battlefield memories. And he has a lot of grass to cut … almost two acres surrounding his family’s home.

His 20 years in the Marine Corps, much of it training for, or spent on, the battlefield, has left him with daily pain in his hips, back, shoulders, knees and ankles. That combined with an aging mower with faulty shocks and suspension, took the fun from his weekly passion turning it into a painful chore he no longer looked forward to.

Those days are over, though through the help of Hope For The Warriors and its Warrior’s Wish program.

Singleton described how his old mower had taken a piece of joy from his life.

“The riding mower I have now is several years old and is starting to show its age and wear as its owner has,” Singleton shared. “The tires and shocks give me quite a beating, and while I enjoy cutting the grass, the damage it does to my body, mainly my back and legs, had started to take a very real and deep physical and mental toll on me.”

The goal of the new mower is to supply a smooth, comfortable ride for the weekly chore, something Singleton says he will enjoy.

Singleton spent seven months in Iraq as a Platoon Commander, working with his troops to clear out the last pockets of insurgency and training Iraqi police to eventually self-police in his area of operation.

While in Iraq, Singleton’s platoon sergeant’s military vehicle struck an improvised explosive device, injuring the sergeant and three other Marines. Less than eight hours later, Singleton was leading the convoy back to base when it was attacked by a remotely detonated “tank killer” IED, killing one and burning or severely wounding two other Marines.

“In less than eight hours, I sent seven Marines back home, one of them being a fatality,” said Singleton shared. “With little more than 10 hours to debrief, eat, crash, refit, rearm and suit back up, we were back out dropping off snipers and continuing the mission.

Singleton said he and his Marines spent the rest of the deployment clearing the area, taking small arms fire, mortar attacks and finding countless IEDs and bomb-making materials. “No one left there unchanged.”

Singleton deployed one more time before retiring in 2015, after assignments at the Marine Corps Warfighting Lab and lastly as the Operations Officer of the Nashville Military Entrance Processing Station.

Today, he works as a project manager in multi-family housing construction, putting his Bachelor’s degree in civil engineering and Master’s in Business Administration to use.

“The more time passed that I was out of the Corps, the worse my PTSD symptoms got, until my wife finally convinced me that I needed to get help. I have joined numerous veterans’ groups and started doing more events with veterans and my family.”

He recently received a service dog to help him “once again enjoy being out in public and attend events with my wife and children.”

“At Hope For The Warriors we know that our warriors don’t always come home the same as when they’ve left for war,” said Robin Kelleher, co-founder and CEO of Hope For The Warriors. “We are thankful for anything we can do to help restore some joy and normalcy for veterans and their entire family.”

Since 2006, Hope For The Warriors has provided almost $2.5 million in grants, assisting with 251 wishes.

About Hope For The Warriors: Founded in 2006, Hope For The Warriors is a national nonprofit dedicated to restoring a sense of self, family and hope for post-9/11 veterans, service members and military families. Since its inception, Hope For The Warriors has served over 40,000 through a variety of support programs focused on health and wellness, sports and recreation and transition. One of the nonprofit’s first programs, Military Spouse and Caregiver Scholarships, has awarded 212 scholarships to caregivers and families of the fallen. For more information, visit hopeforthewarriors.org, Facebook, Twitter or Instagram.