One of the best parts of our annual Got Heart Give Hope Gala is recognizing and honoring members of our community who truly embody our values of restoring self, family and hope. Chris Hedgcorth has been with Hope For The Warriors since the very beginning at Camp Lejeune and Wounded Warrior Battalion East. He was instrumental in the first Run For The Warriors race, an event that helped build the organization. And Chris has attended every run in Jacksonville, North Carolina, since. He has always been willing to help and is a constant advisor to HOPE on how to best care for the warriors we serve. Chris was injured in 2004, and the group of warriors he returned with sparked conversations that eventually became the Wounded Warrior Battalion. He’s devoted to caring for others and instilling principles like accountability, structure and purpose and continues to instill those values in the lives of injured service members. 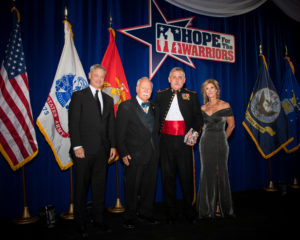 In 1983, Chris Hedgcorth was a kid with a ponytail who agreed to listen to a Marine recruiter to avoid sitting through math class. As the fourth of six kids from a Navy family, in the Navy town of Newport, Rhode Island, it probably didn’t take much convincing for him to step upon the Marine Corps’ famous yellow footprints. Twenty-six years later, in 2009, Chief Warrant Officer 4 Hedgcorth retired from the Corps. Today, if you know that history, Chris is immediately identifiable in a crowd, even on first meeting. He has the manner of many senior Marines, with eyes that seem to say they’ve seen it all and found a way to laugh at most of it. What is uncommon about Chris however, what distinguishes him, is the depth and intensity of his dedication to his fellow wounded Marines. It’s easy to speak the Marine motto, “Semper Fidelis” or “Always Faithful.” Chris Hedgcorth lives it.

After a career in which he saw action in Panama, Operation Desert Storm, the Balkans and Iraq, it would have been reasonable if Chris had thrown his boots over the wire and simply faded away. If that were ever the plan, however, in 2004, the shrapnel that wrecked his knee gave him the mission that still drives him today.

Unsatisfied with an administrative job, Chris arranged an assignment as the Operations Officer of the nascent Wounded Warrior Battalion, where they were writing the book on caring for wounded servicemembers. Many wounded warrior needs were unmet by military regulations that simply didn’t foresee the requirements of the modern veteran population.

That’s when Hope For The Warriors became critical to keeping the faith with America’s most deserving citizens. Chris recalls, “a kid who was in the hospital in Texas. He had a new baby. His wife’s mother needed a visa. It happened almost overnight. We were in a place where the Corps hadn’t figured it out. That’s the gap Hope For The Warriors was filling, gaps the Department of Defense couldn’t.”

As a 2019 Vigiano Family Hope & Courage Award honoree, Chris says he is “honored to be counted among the people who have helped Hope For The Warriors help us.” That he stands amongst giants is not lost on the Marine who met the award namesake, John Vigiano Sr., in New York, near the site of the World Trade Center Twin Towers. John and the Vigiano Family leave a “legacy of sacrifice for this country” that Chris honors by advising Hope For The Warriors and pushing for critical accountability, structure and purpose for wounded servicemembers.  And like the Vigianos, Chris’ family serves our nation with a son, a son-in-law, and a daughter-in-law in the Marine Corps.

Though we may not see him on his hand cycle much anymore because he’s declared himself “old,” there’s no doubt that Chris’ commitment to Hope For The Warriors remains iron clad, and that he appreciates the “continued contact with the wounded and their families and a chance to ensure they’re till being taken care of.”

Asked why he still cares so much, Chris’ perpetually laughing eyes get very serious, “Because they’re my kids. They always will be. They’re still there, and the families are still figuring out how to deal with it. They’re not going away.”