Providing care to brave men and women of our military after they leave the service is paramount to a successful and healthy transition. This may mean anything from physical care for injuries to employment services to education programs. But for others, it may simply be the desire to find support amongst other veterans who can relate to their experiences and feelings post-military. Understanding this firsthand is retired Marine Corps sergeant major and HOPE’s Director of Military Relations Lee Bonar. 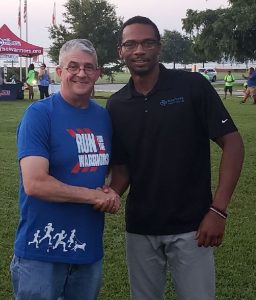 Dedicating 33 honorable years of service to the Marine Corps, Lee has been a part of many moments of military history for our country. This month, as we reflect on the 21st anniversary of 9/11, we think about how this changed the lives of so many members of the military community who served during this time, including Lee. In 2003, Lee deployed as a first sergeant in support of Operation Iraqi Freedom during the invasion of Iraq. Seven years later, he deployed again as a sergeant major supporting Operation Enduring Freedom in Kandahar, Afghanistan.

“After 9/11, every aspect of training, leadership, and focus were heightened,” said Lee. “We had to prepare to deploy with totally new mindsets and tactics. Every boot on the ground had to be engaged in the environment, and many new lessons were learned both in theater and at home.”

After retiring in 2018, Lee was introduced to HOPE through one of his mentors, who saw an open position for the Director of Military Relations. After reading the description, Lee knew this was the job for him and has been part of the HOPE team ever since!

“Working for HOPE has given me the same continued purpose in life as my active service in the Marine Corps,” said Lee.

As the Director of Military Relations, Lee plays a critical role in the well-being of our warrior community. Leading a group of six combat veterans who serve as HOPE’s Military Veteran Program Coordinators (MVPCs) and Military Veteran Program Managers (MVPMs), Lee and his team support service members, veterans, and their families. The military relations team constantly steps up as a pillar of support, whether through peer-to-peer engagement, HOPE events, or being there as a continuous connection to help navigate the ebbs and flows of life.

“The main purpose of the MVPM is to increase the visibility of the Hope For The Warriors programs offered to veterans, service members, caregivers, and military families in their communities,” said Lee. “MVPCs are our “forward deployed” staff and serve as the connectors between military families, the local communities, and HOPE program staff. In this frontline position, the MVPC plays a critical role as an ambassador and liaison to military bases, civic and veteran non-profit organizations, chambers of commerce, and local government agencies. This provides the ability to support and grow our peer-to-peer outreach, which is crucial in supporting HOPE members.”

Working from Camp Lejeune, NC, Lee has consistently been there for our warrior community and our entire HOPE team! Whether it be a daily dose of motivation, expert insight, or a shoulder to lean on, Lee never fails to show up for us each day. We are proud and honored to call him part of the HOPE family and can’t wait for what’s next!

“Having the ability to assist and provide stability to those sharing the same challenges I faced is more than a reason to wake up daily with a purpose,” said Lee. “HOPE has given me a family that works for the betterment of others; just like in the Marine Corps we had each other’s backs. That’s how Military relations and the HOPE Team see every person that connects to us. Once you become a part of us, you are with us through the good, the bad, and the ugly. We do have your back!”