Joshua Sooklal admits that at times, he gets too involved with his clients. But having been in the same position as many of his clients, he knows most of the time that’s not a bad thing. “Support and service is a life’s mission. I truly enjoy helping people because I know what it’s like not
to be helped,” said Sooklal.

Sooklal is a military and veterans program manager for Hope For The Warriors. Or rather that is his official title. He thinks of himself as providing peer support, listening, and helping when someone calls.

“I’ve been working with HOPE since April, and really, I haven’t worked a day since I started.”

“The official term for what I do would be peer support, but I really think I get more from them. We usually develop a relationship. I find out if they are in need, and HOPE has the things to offer to help them.”

“Peer support” works well for Sooklal. He has first-hand experience and understanding of what many of his clients are going through when they first make contact with him. 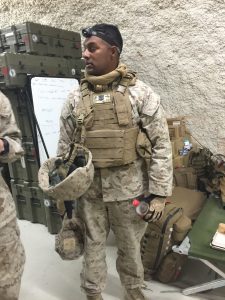 He was a Navy corpsman who suffered multiple traumatic brain injuries while deployed in the Middle East with the Marines. He left active military service in 2016 but stayed in the reserves for several more years.

A few years ago, he began working with veterans through the VA, but in the last couple of years began to struggle with PTSD. That struggle reached a pinnacle a year ago when his best friend committed suicide.

“I had given up on people and veterans after my best friend passed away last year,” said Sooklal. Sooklal had met Lee Bonar, HOPE’s director of military relations, a couple of years earlier and the two remained in touch. When Sooklal was at his lowest point, he said Bonar, “called me out of the blue. He was a support system, the best I ever had because he cared. We just talked, telling each other what’s going on in our lives.” It wasn’t long before Sooklal had a different type of a call from Bonar.

“I got a call from Lee, and he offered me this job and at first, I told him I didn’t want it. But I slept on it, called some key friends, and talked. The next day I called Lee, formally applied, and got hired.” Sooklal became HOPE’s military and veterans program manager in New York City, the city he loves passionately.

“I don’t know that what I went through gives me an advantage, but it helps me be very straight forward with them. I get to facilitate a person in the betterment of their life. I get to make a difference in a person’s life.”