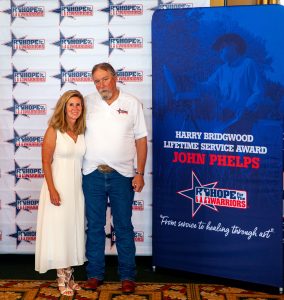 Presented by World Series champion Doug Flynn and TV host John Daly. Phelps received the Harry Bridgwood Lifetime Service Award, which is awarded to a Vietnam-era veteran who has committed his or her life to serving the next generations of the warrior community.

The annual Summer Soiree at River Landing Country Club in Wallace, North Carolina honored three members of our nation’s armed forces and their families with the Vigiano Family Hope & Courage Awards, in addition to honoring individuals, corporations and organizations which have stood beside the organization in serving military families.

“John began his journey with Hope For The Warriors as our hunt manager,” Robin Kelleher, Hope For The Warriors co-founder and CEO said. “Today, John is an exceptional artist and friend, that we spent several years with recreating the iconic photo, ‘Hell House’ from Fallujah, Iraq in 2005 as a bronze monument. His commitment to his and his son’s fellow service members will forever live on with his amazing artwork.”

Phelps and Hope For The Warriors created the monument to honor those wounded in the line of duty and those who never returned home. The monument represents the ultimate price of battle, the spirit of brotherhood, and dedication known by service members and their families.

Today, two life-size monuments have been donated to the U.S. Marine Corps and sit in front of the Wounded Warrior Battalion at camps Lejeune and Pendleton, in addition to a smaller monument that is housed at the National Museum of the Marine Corps in Virginia.

“Harry Bridgwood was a close friend of mine and I feel very honored to receive this award in Harry’s memory,” Phelps said.

Phelps was born and raised in Cheyenne, Wyoming. He attended the University of Wyoming until he joined the U.S. Navy and was deployed to Vietnam.

After Vietnam, he served as a guide for elk and bighorn sheep hunters in the Fitzpatrick and Glacier Wilderness areas in Fremont County, Wyoming.

Today, Phelps exemplifies the history of the Great American West with his art, beginning with the explorations of its vast terrain, the fur trade era and its mountain men, the epoch years of the cowboy, ranching and rodeo. His works portray the early years in American history through present day. A lifetime of cowboying, horse packing, hunting and fishing lend authenticity to his subject matter.

About Hope For The Warriors: Founded in 2006, Hope For The Warriors is a national nonprofit dedicated to restoring a sense of self, family and hope for post-9/11 veterans, service members and military families. Since its inception, Hope For The Warriors has served over 40,000 through a variety of support programs focused on health and wellness, sports and recreation and transition. One of the nonprofit’s first programs, Military Spouse and Caregiver Scholarships, has awarded 192 scholarships to caregivers and families of the fallen. For more information, visit hopeforthewarriors.org, Facebook, Twitter or Instagram.