DIALING UP HOPE: HOW QUICK CALLS TURNED INTO LIFELONG FRIENDSHIPS 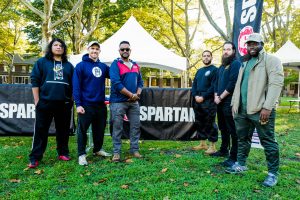 Since leaving active military service in 2016, Josh Sooklal’s phone would ring every four or five months. “Those phone calls saved me.” The man doing the dialing was Lee Bonar, Director of Military Relations at HOPE. “He helped me throughout this process. Just talked to me. Talked to me like a human,” said Sooklal.

For someone like Sooklal, a Navy Corpsman who had “too many knocks in the head,” it meant everything to hear someone on the other line who understood. Someone like Lee, who spent over 33 years in the Marine Corps.

Lee saved Josh, and now Josh is saving others as a military and veterans program manager at HOPE.

“I really hate people suffering. If I can prevent that, I will. That was my thing. Something about caring for people and making sure they don’t suffer. I’ve seen a lot of it.”

Last spring, Josh met the man on the other end of the phone, Lee. He gave him a big hug.

“It was really more for, hey man, thanks for saving my life.”

As a military and veterans program manager, Josh connects and provides HOPE for service members and veterans, just like Lee did for him. 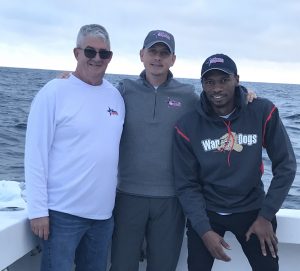 Sooklal lives in New York City. About 600 miles away in North Carolina another HOPE employee, Scott Griffith, serves as a military and veteran program coordinator. Scott has a busy schedule, making calls to over 100 clients and attending events across the state.

No matter what the weather is, Scott and several other military members hit the golf course between October and March. It’s a great networking opportunity, and who doesn’t love getting outdoors? Scott has his friend Curtis Lee to thank for introducing him to HOPE. They shared the same MOS and were drill instructors together back in 2005.

“We established a friendship through that and have remained lifelong friends ever since,” Griffith said. The mentorship and the camaraderie make HOPE different.

“I just really felt like my friends who worked for HOPE and everyone I had engaged with was very involved and cared about my future,” Griffith said. Scott took over his mentor’s role when he moved on from HOPE, and now he has the chance to impact so many lives.

“I don’t think I’d be alive today if I didn’t have veteran friends that I can lean into. As we work with HOPE, we get to pay that forward.”

Connect with services at hopeforthewarriors.org to experience the connection, community, and mentorship that both Josh and Scott found and that they now work to foster.

Founded in 2006, Hope For The Warriors is a national nonprofit dedicated to restoring a sense of self, family and hope for post-9/11 veterans, service members and military families. Since its inception, Hope For The Warriors has served over 40,000 through a variety of support programs focused on health and wellness, sports and recreation and transition. One of the nonprofit’s first programs, Military Spouse and Caregiver Scholarships, has awarded 192 scholarships to caregivers and families of the fallen. For more information, visit hopeforthewarriors.org, Facebook, Twitter or Instagram.