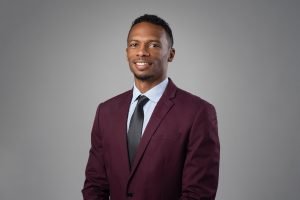 Monroe “Roe” Holcomb was born and raised in Chicago, Illinois. However, Jacksonville, North Carolina has been his home since 2006.

In 2010, he was medically separated from the Marine Corps and started working for Schilsky Chiropractic as an assistant X-ray tech and floor leader. This role offered Roe the opportunity to coordinate grassroots marketing projects for Med First within the Schilsky Chiropratic organization.

During his time as a volunteer with Hope For The Warriors, he secured a position as a Military Veteran Program Coordinator. In that role, he worked alongside Wounded Warrior Battalion-East, serving as a liaison providing assistance to service members, veterans and families to increase awareness of programs available to them through Hope for the Warriors.

When not working with the veteran and military community, Roe is a diehard sports fan—go Cubs, Bears, Bulls! He enjoys volunteering his time to mentor youth. Roe’s hobbies include coaching a local Christian school basketball team and attending charity events and local fundraisers.