Service members don’t serve alone. In 2015, there was a reported total of 1,728,710 family members who served alongside their Active Duty service member. Of that number, there were 1,076,803 children and 641,639 spouses. Whether you live in a prevalent military community or not, chances are you know a family member of someone that serves in the Armed Forces. That’s why you should know what a Blue and Gold Star family are and how they are different.

What is a Blue Star Family?

A Blue Star Family consists of the immediate family member(s) of a service member during a time of conflict. 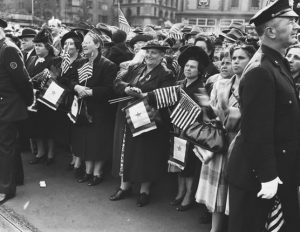 How do you recognize a Blue Star Family?

A Blue Star Family can display a Blue Star Service Flag. The number of blue stars on the flag corresponds to with the number of individuals who currently serve in the Armed Forces from that immediate family.

The Blue Star Service Flag was patented and designed by WWI Army Captain Robert L. Queisser who, at the time, had two sons serving on the front line. The flag quickly became the unofficial symbol of a child in service. 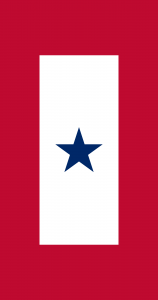 What is a Gold Star Family?

A Gold Star Family is the immediate family member(s) of a fallen service member who died while serving in a time of conflict.

How do you recognize a Gold Star Family?

A Gold Star Family can display a Gold Star Service Flag for service members who were killed or died, while serving in the Armed Forces, from causes other than dishonorable. The number of gold stars on the flag corresponds to with the number of individuals who were killed or died. A gold star is placed over the blue star on a Blue Star Service Flag so that the blue forms a border and creates GoldStar Service Flag. The U.S. Department of Defense also issues Gold Star lapel pins to immediate family members of a fallen service member of the military. These pins are worn by spouses, parents, and children of service members killed in the line of duty and contain a gold star on a purple circular background.

President Wilson authorized a suggestion made by the Women’s Committee of the Council of National Defenses, that mothers who had lost a child who served in the war could wear a traditional black mourning armband with a gold gilt star in 1918. This approval led to the tradition of a gold star covering the blue star on the Service flag to show that the service member had passed. It’s believed Wilson coined the term “Gold Star Mother.” 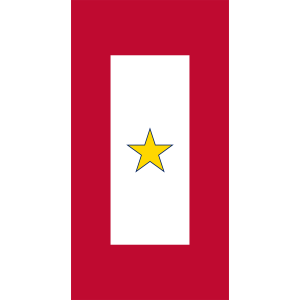 Who can display a Service Flag?

The Department of Defense specifies that immediate family members authorized to display the flag include: spouses, parents, children, siblings, stepparents, stepchildren, stepsiblings, half-siblings, adopted parents, adopted children and adopted siblings of a United States service member. The flag can be displayed in the authorized residence’s window.

The Service flag can also be displayed by an organization to honor the service members of that organization serving during a period of hostilities or war.

Since June 23rd, 1936, after the passage of a joint congressional resolution, our nation has recognized the last Sunday of September as Gold Star Mother’s Day. Amended in 2011, President Barack Obama included the recognition of all Gold Star family members on this day.

How does Hope honor and serve Blue and Gold Star Families?

Hope For The Warriors offers programs, to help service members, veterans, and military families, which includes Blue and Gold Star Families. These programs aim towards restoring a sense of self, family, and hope by focusing on transition, health and well-being, peer engagement, and connections to community resources. In 2016 alone, Hope For The Warriors served 55 Gold Star Families, which included honoring 24 Gold Star Family Members at a NASCAR race through our Drive For Hope Program.

What can you do to Honor Blue and Gold Star Families?

Since the Iraq and Afghanistan Wars have been ongoing for many years, people forget too soon the meaning of Blue and Gold Star Families. By recognizing the significance of a Blue or Gold Star Service Flag and a Gold Star lapel pin you can honor those who have survived, whether it’s a parent, spouse, or child. This knowledge and recognition is important to honor the families of the Fallen and those who are deployed.