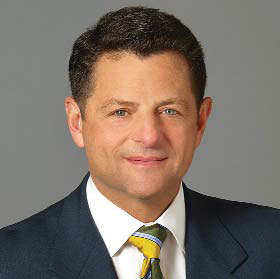 Richard Wood, the energetic leader of Plaza Construction Corp., takes great pride in the fact that he has helped to shape the New York skyline. For more than 30 years, he has been affiliated with Fisher Brothers and Plaza Construction Corp. throughout his long career has been involved in many of NewYork City’s most complex building projects-including over 20 million square feet of new core and shell construction, interior renovation and sophisticated infrastructure upgrades.

Skyscrapers that have directly benefited from his on-site presence can be found across the city. They include: Park Avenue Plaza, 299 Park Avenue, the St. Thomas Choir School, Random House World Headquarters, 200 Chambers Street, the residential tower at 26 Astor Place, and 11 Times Square among many others.

Under Richard Wood’s astute leadership, Plaza Construction Corp. has grown to be one of the nation’s most respected providers of construction management and general contracting services and regularly represents leading national and international corporations. In 1999, Plaza received the prestigious American Architecture Award presented by The Chicago Athenaeum Museum for its role in the construction of NYU’s University Hall.

His intelligence and outstanding abilities were quickly recognized, and he steadily progressed from field superintendent to general superintendent to project executive. In 1995 he was named executive vice president of Plaza Construction and in 1997 assumed his current title as President.

Today, Plaza’s reputation for excellence and integrity, cultivated by its CEO Steven Fisher in tandem with Richard Wood, have enabled it to evolve from a modest company that only serviced Fisher family projects into a nationally acclaimed firm with annual revenues of $1 billion. Thanks to his longstanding association with the Fisher family, one of New York’s great owner/builders, Richard Wood gained unique insight into the crucial relationships that link effective construction management with developer’s vision. This fostered an intense commitment to overseeing a firm that maintains a stellar record of on-time and on-budget performance.

On a more personal level, Mr. Wood is an accomplished outdoorsman and father of two boys who lives with his wife Margaret in Westchester County. He is deeply committed to such philanthropic causes as the Intrepid Foundation, sits on the Board of Friends of the Vietnam Veteran’s Plaza and is an advisory Board Member to the Valerie Fund, a provider of comprehensive health care for children with cancer and blood disorders. In 2000, he was presented with the Life Leadership Award from the LIFE Organization.