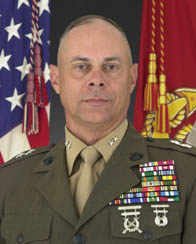 Major General Dickerson was commissioned a second lieutenant upon graduation from Bryant College with a Bachelor of Science Degree in June 1973. He also holds a Master’s Degree from Central Michigan University (1981) and the College of Naval Warfare (1987).

Following completion of the Basic School in April 1974, Major General Dickerson attended the Ground Officer Supply School at Camp Johnson. Upon completion, he reported for duty with Second Shore Party Battalion, followed by Second Medical Battalion where he served as the Battalion Supply Officer for each billet. In September 1976, he was assigned duties as an Analyst Officer, Field Supply Maintenance Analysis Office-One, Headquarters, U.S. Marine Corps. He was transferred to Third Marine Division in September 1978 where he served as the Assistant Division Supply Officer, Division Supply Operations Officer, and the Officer-in-Charge of the Management Assistant Team.

Major General Dickerson was ordered to the Marine Amphibious Warfare School, Quantico, VA, in 1979. Upon graduation in June 1980, he served as the Marine Corps Property Officer, Fourth Marine Corps Aircraft Wing, New Orleans, LA. Returning to Camp Lejeune, NC in November 1983, he served as the S-3, Second Supply Battalion, then as Operations Officer, Brigade Service Support Group Six where he worked with Maritime Prepositioning Ships, Squadron One. During this assignment, he was selected to attend the Naval Command and Staff College, Naval War College, Newport, RI.

Following graduation, Major General Dickerson was assigned duty as the Logistics Operations Officer, C-4, Combined Forces Command, Seoul, Korea. Returning to the United States in the summer of 1989, he reported to the Fourth Marine Amphibious Brigade for duty as the Deputy Assistant Chief of Staff, G-4. During this assignment, he deployed to Southwest Asia to participate in Operations Desert Shield/Desert Storm and Operation Eastern Exit. He returned to the United States in April 1991. Major General Dickerson was reassigned to Fleet Marine Forces, Atlantic, where he served as the Operations and Plans Officer, G-4. During August 1992, he reported to the Industrial College of the Armed Forces, National Defense University, for duty as a student.