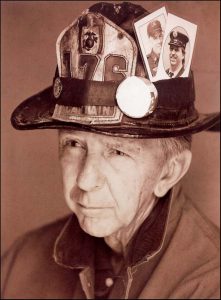 John Vigiano (1938-2018) was a resilient hero. He and his family have lived a life of service. John, a former Marine, retired as one of FDNY’s most decorated fire captains. Despite his impressive record of service, John was most proud of his family and the paths his two sons chose: John Jr., an FDNY firefighter, and Joe, an NYPD detective.

John and his wife, Jan, lost both their sons on the morning of September 11, 2001, yet the pain strengthened the family’s resolve to support those who serve. In honor of their sons, John and Jan worked tirelessly donating their time and resources to improving the lives of Gold Star Families and wounded heroes across the nation.

John provided Hope For The Warriors with guidance and wisdom throughout the years and helped us reach veterans in the communities of New York City and Long Island.

“John’s legacy is one of honor, courage and resiliency,” said Hope For The Warriors CEO Robin Kelleher. “He was a fighter in every sense of the word. The way he selflessly served his community inspires our work at Hope For The Warriors. We are forever grateful to have known John and the entire Vigiano family. Our nation is a better place because of his service.”