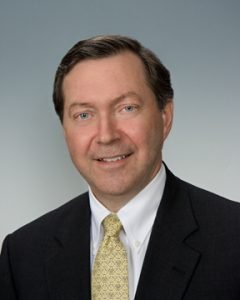 John, a native North Carolinian, currently resides in Linville, NC. He retired from a 40-year career in public accounting in 2014, having practiced as a tax partner with Arthur Andersen until its demise in 2002 and then with PricewaterhouseCoopers (PwC) as the Leader of its US Banking and Capital Markets Tax Practice, a member of PwC’s US Tax Leadership Team, and as the Worldwide Engagement Tax Partner serving Bank of America.

In 2009, during John’s tenure as Leader of PwC’s US Banking and Capital Markets Tax Practice, he co-founded the Financial Services Tax Study Group, composed of the Tax Directors of the six largest US-based multinational financial services companies, which was formed to address mutual issues they faced as a result of the global financial crisis.

John’s specific areas of technical specialty included both M&A as well as international tax, having initiated, established, and managed specialty groups in both practice areas while at Andersen. Since retiring from PwC, John has been a consultant to a number of US public companies in the process of acquiring or restructuring international operations as well as to several of the banking practices of PwC located outside the US.

John and his wife Carolee have one son, an active duty Lieutenant Commander in the US Navy, and one grandson.