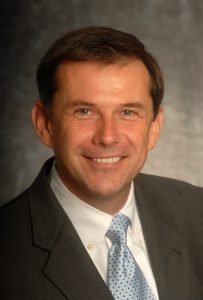 As Vice President, Global Corporate Communications, Government Affairs and Sustainability for Sealed Air Corporation, Jim is responsible for all internal and external corporate communications, sustainability, branding, public affairs, and Sealed Air’s philanthropic and governmental strategies, as well as translating the organization’s vision and mission into a fully integrated communications campaign. Sealed Air is a Fortune 500 company, with approximately 24,000 employees operating in 62 countries with distribution reaching 175 counties, and net sales of $7.8 billion in 2014.

Previously, Jim was Senior Vice President of Communications and Marketing for Siemens Corporation, where he was responsible for the strategy, direction and management of corporate communications and marketing in North America. Jim led the execution of the U.S. Answers Campaign, the largest branding and marketing campaign in the company’s history. Jim also served as Chairman of the Siemens Foundation.

Prior to his tenure at Siemens, Jim served as Director of Communications at the United States Military Academy at West Point. In that position he executed an innovative communications plan in celebration of West Point’s 200th anniversary. This plan resulted in 19 books, eight network television documentaries, and won the Public Relations Society of America Award of Excellence and the PR Week Public Campaign of the Year.

Jim has more than 25 years of management experience that includes integrated marketing, strategic communications, media relations, internal communications, crisis communications and community relations. He is a graduate of Lock Haven University where he received his undergraduate degree. He completed his MBA at Embry-Riddle Aeronautical University.

Jim was a Lieutenant Colonel in the United States Army. During his 20 years of service he was a Master Army Aviator and U.S. Army Helicopter Instructor Pilot. He was awarded the Legion of Merit, Air Assault Badge and Humanitarian Service Medal, as well as numerous other awards.

Jim serves on the Boards of Directors of Hope For The Warriors and the Lock Haven University Foundation.