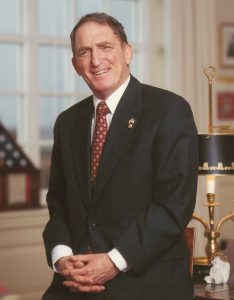 General Krulak was appointed the 31st commandant of U.S. Marines Corps on July 1, 1995, a post he held until his retirement June 30, 1999. As the senior leader of the Marine Corps, he had overall responsibility for recruiting, training, operational readiness, and welfare of more than 220,000 active and reserve forces and 20,000 civilian employees. During his tenure, he annually increased the USMC share of the Department of Defense budget by $1.5 billion to initiate a modernization effort that continues to benefit troops today.

Following his retirement from military service, General Krulak was named in 2001 as chairman and CEO of MBNA Europe Bank in Chester, England, where he spearheaded a financial turnaround for the third largest credit card provider in the United Kingdom and the Republic of Ireland. Under his leadership, net income and loans doubled, the number of managed accounts increased from 3.2 million to 8.4 million, and the bank expanded into Spain, its first entry into a non-English speaking country.

In 2004, he joined MBNA America Bank N.A. in Wilmington, Del., as vice chairman and chief administrative officer, where he was responsible for corporate development and acquisitions, personnel, and education for the FORTUNE 500 company employing 28,000 people in five countries and 20 locations.

General Krulak currently serves as the co-chairman of the Founders Group of the Marine Corps Heritage Foundation which has raised in excess of $150 million for Phase I of the National Museum of the Marine Corps, and on the boards of Union Pacific Corp., Freeport McMoRan Copper and Gold, Aston Villa Football Club, Uniformed Services University of the Health Sciences, and CEO Forum. He is a member of the Council on Foreign Relations, Hope for the Warriors, Human Rights First, and Officer Christian Fellowship.

A native of Quantico, Va., General Krulak received his bachelor’s degree in engineering from the U.S. Naval Academy and his master’s degree in labor relations from George Washington University.

General Krulak and his wife of 47 years, Zandra Meyers Krulak, have two sons.