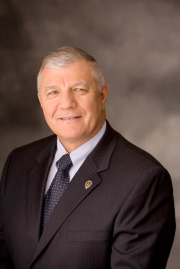 General (USA, Ret) Richard A. Cody was born in Montpelier Vermont. He graduated from the United States Military Academy at West Point on 6 June 1972 with a BS. He is a graduate of the Transportation Corps Officer Basic and Advance Course, the Army’s Aviation Maintenance Test Pilot School, the Command and General Staff College and the Army War College. He is a master Army Aviator, rated in over 19 Helicopters and has over 5000 of flight time.

General Cody held several key staff positions to include Assistant Division Commander, 4th Infantry Division (MECH); Deputy Commanding General, Task Force Hawk in Albania; Director of Operations, Plans and Mobilization, Department of the Army; Deputy Chief of Staff for Operations, Department of the Army; and he served as the 31st Vice Chief of Staff, Army from June 2004 to August 2008.

General Cody currently is a Corporate Senior Vice President and Officer for L-3 Communications Corporation. He is the Chairman of the Board and National Chairman for Homes for Our Troops; Chairman, National Trust for Wounded Warriors; Board Trustee of the Intrepid Fallen Heroes Fund; Board Trustee of the George C. Marshall Foundation; a Trustee of NOBLIS; on the Advisory Board for Hope for the Warriors; the founder and lead pilot for Operation Flying Heroes, an organization that provides flights for Iraq and Afghanistan Wounded Warriors; and is in the Army Aviation Hall of Fame.

General Cody is married to the former Vicki Lynn Heavner and they have two sons, Clint and Tyler, who are active duty Army Helicopter pilots who have several combat tours in Iraq and Afghanistan.