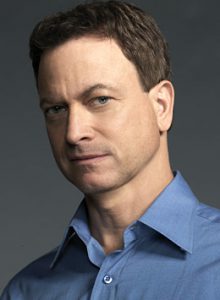 Gary Sinise began acting at the age of 16 during his sophomore year in high school but it was his portrayal of Lt. Dan in the Oscar winning film Forrest Gump that brought him mainstream attention and earned him nominations for an Academy Award, Golden Globe and the Screen Actors Guild Award. He received the Best Supporting Actor Award from the National Board of Review, and the Commander’s Award from the Disabled American Veterans for the role as well. He then went on to take starring roles in the acclaimed Apollo 13 opposite Tom Hanks and Kevin Bacon; the thriller Ransom with Mel Gibson and Rene Russo; and Brian DePalma’s psychological thriller Snake Eyes.

He was last seen on the big screen in Columbia Pictures’ The Forgotten with Julianne Moore, and The Human Stain opposite Anthony Hopkins, Nicole Kidman and Ed Harris. He also provided the voice of Shaw in Sony’s animated feature Open Season.

Gary was born in Blue Island, Illinois, to a family who supported his artistic endeavors, and encouraged his drive to create. After graduating from high school in Highland Park, at the age of 18, he co-founded Steppenwolf Theatre Company of Chicago along with friends Terry Kinney and Jeff Perry, where he served as Artistic Director for seven years.

He has since starred in over a dozen productions at the renowned theatre including the role of Tom Joad in The Grapes Of Wrath, for which he garnered a Tony Award nomination and a Drama Desk Award; True West, Balm In Gilead, Streamers and The Caretaker. He received a Joseph Jefferson Award for Marsha Norman’s Getting Out at Chicago’s Wisdom Theatre. He starred as Stanley Kowalski in A Streetcar Named Desire, and Randle Patrick McMurphy in One Flew Over The Cuckoo’s Nest at Steppenwolf, the Barbican Theatre in London, and then on Broadway, earning him another Tony nomination for Best Actor.

Sinise Directed and co-starred with John Malkovich in the landmark production of Sam Shepard’s True West at Steppenwolf and off Broadway, where he won an Obie Award for Best Director. He also Directed Sam Shepard’s Buried Child which kicked off Steppenwolf’s 20th Anniversary and continued with a successful run on Broadway where it was nominated for five Tony Awards, including one for Sinise for Best Director. His other Directing credits include Tracers, Frank’s Wild Years, The Miss Firecracker Contest, Waiting for Parade, Action, Road To Nirvana and Landscape Of The Body. He received a Joseph Jefferson Award for his direction of Lyle Kessler’s Orphans, which also played off-Broadway and in London with Albert Finney.

Since its founding, Steppenwolf has showcased the talents of many notable actors, and now in its fourth decade as a professional theatre company, has received unprecedented national and international recognition from the media, theatre critics, and audiences alike.

Sinise also made his mark as a feature film Director with Of Mice And Men, which he co-produced and co-starred in with John Malkovich, as well as Miles From Home starring Richard Gere, Kevin Anderson, Helen Hunt and John Malkovich. Both were screened in competition at the Cannes Film Festival.

Gary executive produced the film Brothers At War, a rare look at the bonds and service of our soldiers on the frontlines, and the profound effects their service has on the loved ones they leave behind.

He narrated the Discovery Channel mini-series When We Left Earth, The Military Channel’s Missions That Changed The War, The History Channel’s 10-part docudrama WWII In HD, the Chicago Cubs documentary We Believe, and the audio books for John Steinbeck’s Travels With Charley and Of Mice And Men.

He received an honorary Doctorate in Humane Letters for his work in theatre and film as a Producer, Director and Actor from Amherst College, and an Honorary Degree of the Doctor of Fine Arts from CSU Stanislaus.

Apart from his television and film work, Gary hosts via video the Epcot ride Mission: Space at Walt Disney World in Florida.

Gary has been married to actress Moira Harris since 1981, and they have three children: Sophia, McCanna and Ella.