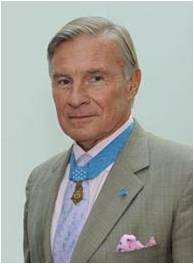 Paul “Buddy” Bucha was born August 1, 1943, to Col. and Mrs. Paul Bucha. As a child he lived abroad in both Germany and Japan. He graduated from High School in Ladue, Missouri, a suburb of St Louis, and immediately entered the United States Military Academy at West Point. Paul Bucha received his BS in 1965 graduating academically in the top 2% of his West Point Class; number two in Military Order of Merit and a two time All American and Captain of the Swim Team.

Immediately upon graduation from West Point, he attended the Stanford University Graduate School of Business receiving his MBA in 1967 and completing his Airborne and Ranger training between academic years. After Stanford, Paul Bucha reported for duty with the 101st Airborne Division at Fort Campbell, Kentucky to prepare for deployment to Vietnam as part of Operation Eagle Thrust in November 1967. While a company commander in Vietnam, Paul Bucha received among other decorations, the Bronze Star with V and Oak Leaf Cluster, Purple Heart and Medal of Honor. Upon his return to the United States, he reported for assignment as Assistant Professor of Managerial Economics at West Point. He resigned his Army commission in 1972.

Paul Bucha joined du Pont Glore Forgan as a special assistant to H. Ross Perot in 1972 and later moved to the Perot owned Electronic Data Systems Corporation (EDS) as Senior Vice President of International Operations. In 1973, Paul Bucha established the new EDS headquarters in Teheran, Iran, and remained in the Middle East until 1978 having expanded the operations throughout the Middle East and Europe. In 1978, he moved his headquarters to Paris, France, where he remained after leaving EDS to form his own international consulting company. Returning to the United States in 1980, Paul Bucha expanded his company to include real estate development building the environmentally acclaimed development Port Liberte, on New York Harbor.

As a member of the Board of Directors of WHX Corporation, he was asked to assume the title of Chairman of Wheeling Pittsburgh Steel Corporation in 1996 to preside over the reorganization of the company. Completing his assignment in 1999 with Wheeling Pittsburgh Steel, Paul Bucha returned to real estate in 2003 establishing Terra Mark LLC in joint venture with Fisher Brothers of New York City and later, in 2005, his own firm, Terra Mark II, LLC which specializes in residential and mixed use development in environmentally sensitive locations. In addition to real estate, Paul Bucha served as CEO of Delta Frangible Ammunition, the worlds leading developer of lead free ammunition for military and law enforcement.

In addition to his corporate activities, Paul Bucha has been a frequent lecturer to military leaders of all branches on honor and leadership. Appointed Civilian Aide to Secretary of the Army, Paul Bucha worked with Accessions Command supporting the challenge of Army recruiting in a time of war. In addition, Paul Bucha has been active as a member of the Board and an officer of The Fisher House Foundation and Intrepid Fallen Heroes Fund which support military families and wounded warriors. Paul Bucha has also been active supporting the activities of US Army National Guard and Reserve forces giving motivational and leadership presentations across the country. A frequent lecturer at all four national military academies, Paul Bucha has developed a close working relationship with the graduates of those academies including those in current leadership positions of the military. Paul Bucha is a Past President of the Congressional Medal of Honor Society of the United States of America.

Besides his military honors, Paul Bucha is a Gold Medallion inductee of the International Swimming Hall of Fame; recipient of the Ellis Island Medal of Honor; an inductee of the US Army Ranger Hall of Fame. Paul Bucha has four children and three grandchildren and is married to the former Cynthia Carter Bell of Cornwall, New York. Together they reside in Ridgefield, Connecticut.