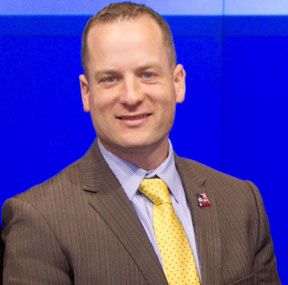 Christopher Page is the co-founder of Army Week NYC and up until recently, Manager of Citi Salutes, a U.S.-based program designed to support military veterans and their families in communities across the country by promoting greater access to financial services that meet the unique needs of our military veterans; supporting professional development, recruiting and mentoring programs; supporting community organizations that benefit military veterans and families; and providing a support network for retired and active-duty employees and those with deployed friends or relatives.

Prior to his current role, Chris worked for Citi as a Vice President in Control & Emerging Risk, and had been an active participant in Citi’s Veterans Volunteer Network as well as a longtime advocate for veterans’ issues in the greater New York City community — roles which would later lead to his current position.

Prior to joining Citi, Chris served in the United States Army, rising to the rank of Sergeant. He completed basic training at Fort Jackson, South Carolina, and advanced artillery training at Fort Sill, Oklahoma. Following his training, Chris was posted to the 18th Airborne Corps Artillery stationed at Fort Bragg, North Carolina. Nearing completion of his first enlistment, Chris re-enlisted for assignment in Germany and was posted to Babenhausen, Germany, where he would serve with the 41st Field Artillery Brigade for the remainder of his active-duty Army career. Chris holds a B.A. from Seton Hall University, which he earned after completing his active-duty military service.