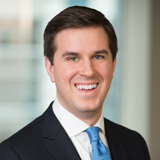 David Dziengowski is a Partner at the Philadelphia office of Morgan, Lewis & Bockius LLP.  He litigates complex employment, benefits, and commercial disputes in federal and state courts throughout the country.

A proud Navy Reservist, David serves as a Commander in the Judge Advocate General’s (“JAG”) Corps.  In this capacity, he serves as a legal advisor to the Chief of Naval Personnel.

After graduating from Rutgers Law School in 2008, David served as a judicial law clerk.  He clerked for Judge Joseph H. Rodriguez, District of New Jersey, from 2008 to 2009.  He then clerked for Judge Michael S. Kanne, U.S. Court of Appeals for the Seventh Circuit, from 2014 to 2015.  In between those clerkships, Dave Dziengowski served on active duty in the U.S. Navy JAG Corps.

In 2011, David deployed to the Arghandab River Valley of Kandahar, Afghanistan, where he served as a Rule of Law Field Support Officer in the Rule of Law Field Force – Afghanistan.  He worked hand-in-hand with Afghan judges, prosecutors, and investigators, assisting in the development of the rule of law.  He also worked closely with his host Army unit, 1st Battalion, 67th Armor Regiment, assisting with detainee operations.

From 2012 to 2014, David served as appellate defense counsel for the Navy-Marine Corps Appellate Defense Division.  During this time, David also served as an adjunct professor at the U.S. Naval Academy.  There, he taught criminal law, administrative law, law of the sea, and law of armed conflict to Senior Midshipmen. David received the Navy JAG Military Justice Officer of the Year Award in 2013.

David enjoys working with veterans and assisting veteran-related causes.  He lives in Haddonfield, New Jersey with his wife, Jessica, and their children, Edward, Peter, and Lucy