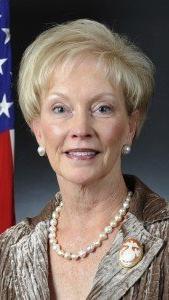 Born, raised and educated in Pensacola, Florida, Bonnie Amos met her Marine fighter pilot husband in September 1971.  From October 2010 until September 2014 Mrs Amos served along side General Amos while he was Commandant of the United States Marie Corps.  Always a staunch advocate for military families, it was during this time Mrs Amos had opportunity influence policies and programs within the Marine Corps and DOD, enhancing the well-being of military families.

She continues to be actively involved in Military Spouse of the Year Award, Advisor to Charlotte BridgeHome, Advisor to Thanks USA, and member of the Board of Directors for the Injured Marine Semper Fi Fund/America’s Fund.  Mrs Amos also serves as spokesperson for Hiring Our Heroes to increase awareness in employment opportunities to both Veterans and their spouses.

In addition to volunteering, she has held a number of positions outside the military community to include banking and commercial real estate development.  Included in her many life experiences, were multiple and unpredictable deployments.

The Amos’ relocated 30 times to 20 different locations, settling permanently in Charlotte, North Carolina upon General Amos’ retirement from the Marine Corps in December 2014.   Mrs. Amos will tell you that some locations were better than others, some more adventuresome; but all were filled with fond memories and great stories.

While not loving every minute of the Marine Corps nomadic lifestyle, she has loved most of it. From the more difficult times, she and her family have learned the lessons of life that have helped shape who and what they are today.  Mrs Amos and her family consider it an honor to have served the Marine Corps and the nation for so many years.  She is loving ‘retirement’ with all of its opportunities.