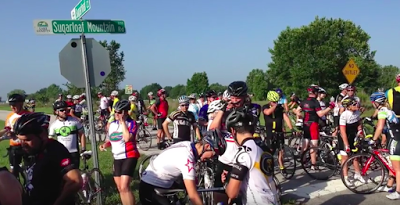 It started when a couple saw a need in their local community and decided to fill the void. Harry and Janice Fenstad built their dream home in 2001 on top of Sugar Loaf Mountain in Lake County, Florida, the highest point on Florida Peninsula. As the Fenstads settled into their new home they noticed that many cyclists would train on the mountain. After a few cyclists stopped Harry to ask if they could drink some water from his garden hose, he decided to set up a cooler at the end of his driveway for the cyclists trekking up the mountain.
What began as setting out a water cooler on weekends eventually turned into a water stop, which the Fenstads manned daily—on a peak weekend they would have to fill up the cooler over six times. The cyclists were grateful for the Fenstad’s generosity and wanted to pay them for putting up the water stop, however, they refused but decided to take donations for veteran and military nonprofits. Harry served in the Air Force from 1963 to 1984 and desired to give back to the military community.
For over a decade, the Fenstad’s water stop has raised money for service members, veterans, and military families. Recently, they were able to raise about $8,000 from cyclists, which Harry matched to make the total $16,000 that went towards buying a motorized wheelchair for a wounded veteran.
One cyclist, Tracy Draper, who has used the Fenstad’s water stop, connected Harry with Hope For The Warriors®. In June 2014, Tracy served as the team captain of Ride Across USA, a charity team of cyclists who rode from California to Florida in 35 days raising funds and awareness for Hope For The Warriors®. Tracy also wrote a book chronicling her journey with Ride Across USA called, Live It: Riding the Highs and Lows of a Cross Country Dream.
In June 2015, the cyclists of Sugar Loaf Mountain learned that Janice Fenstad passed away. To honor her memory and service to the community, Tracy Draper organized a memorial ride for Janice. The memorial ride raised over $1,000 and about 400 cyclists were in attendance. Since the memorial ride, Harry has donated over $1,200 to Hope For The Warriors®. The love, care, and compassion the Fenstads have displayed for their community is truly inspiring and contagious as seen in all of the cyclists that rode in Memory of Janice Fenstad.
Over the past decade, from the office in his home, Harry has been able to sit and watch thousands of cyclist stop at the end of his driveway to quench their thirst, and he is always ready to refill his cooler for the grateful riders.
If the Fenstad’s story inspired you to give and share hope to the military community consider making a donation today or join our monthly giving program to allow service members, military families, and families of the fallen find restored hope!
FacebookTweetLinkedInPrintEmail