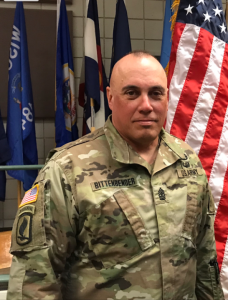 Remaining both physically and mentally tough in moments of adversity is part of what we instill in our warrior community at Hope For The Warriors. U.S. Army veteran Kevin Bittenbender exemplifies this strength firsthand as he has continuously persevered after sustaining a life-altering injury. To honor Kevin for his fortitude, HOPE was proud to present him with a 2022 Vigiano Hope and Courage Award.

Named in honor of John (veteran and FDNY) and Jan Vigiano, who lost both of their sons in New York City on 9/11, the award recognizes service members and military family members who have demonstrated both hope and courage in the face of extraordinary circumstances. Kevin was one of three individuals presented with this award on August 28 at the 2022 Hope For The Warriors Summer Soirée, hosted by River Landing in Wallace, NC, and presented by Siemens Government Technologies.

Kevin served in the U.S. Army for 34 years before retiring as a sergeant major in 2018. Throughout his service, he deployed several times in support of Operation Enduring Freedom. His military duties included field artillery, air defenses artillery, infantry, and military intelligence. As a result of combat deployments, Kevin was exposed to burn pits, causing him to face extreme health problems.

Throughout his recovery journey, HOPE was there to support Kevin in any way we could. After facing a foot amputation because of the burn pits, Kevin found it hard to maintain the active lifestyle he was used to. This led to mental and physical strain, which almost caused Kevin to become a statistic among the 22 lost daily. It was after connecting with HOPE in 2015 and being gifted a handcycle to help him on his recovery journey, that Kevin found motivation to keep pushing forward.

“Hope For The Warriors was first introduced to me by my friend (Michael Kacer), and I believe he saw the internal struggles I was having and how HOPE could help me,” said Kevin. “It was during that time that I was at my darkest moment and was struggling with being less physically active from my first amputation on my foot. The handcycle provided me with hope and the courage to continue and to look forward to becoming active once again.”

After being gifted the handcycle, Kevin began participating in races to pay tribute to three of his soldiers and friends who were KIA during an ambush. After completing his first marathon (Marine Corps Marathon), Kevin was hooked on his new passion and continued to participate in races despite undergoing a left leg below the knee amputation in February 2022.

“This experience has provided me the courage and commitment to complete at least three marathons per year in memory of my fallen soldiers Maj. Hank Ofeciar, Master Sgt. Scott Ball and Sgt. Jan Argonish,” said Kevin.

“This activity greatly assists me with dealing with my survivor’s guilt, PTSD, and physical limitations. My hope is to run my first marathon next year. This would be my very first marathon being able to physically run since my first amputation. I am sure that those two words, hope and courage, will be repeated in my head throughout the course and I would love to be able to dedicate it to the memory of Jan and John Vigiano. I want to display the hope and courage they displayed on September 11.”

Kevin currently works for the Department of Justice in Allenwood, PA, where he developed the Bureau Battle Buddy (B3) program. This program focuses on staff wellness, and assists deployed servicemen and women with transitioning back into the workforce, deployed employees’ family members, and places emphasis on PTSD and suicide prevention.

Kevin also continues to serve our nation’s heroes during his personal time. He is a co-founder of Joint Task Force 22 to Zero, which provides resources for those suffering with PTSD and TBIs because of their work as military personnel, law enforcement, first responders, EMTs and dispatchers. Since 2010, Kevin has also assisted injured veterans as a Paralympic Nordic/Biathlon coach for the U.S. Paralympic Nordic Team. His athletes have won all levels of medals at the Paralympic level. Kevin continues to coach and recruit potential athletes from his monthly visits to Walter Reed Medical Center.

This year, Kevin passed his National Registry as an Emergency Medical Responder and will continue his pursuit of becoming an EMT this winter. He also volunteers his time with the Clinton Township Volunteer Fire Department in Montgomery, PA, as a Firefighter and EMR.

“As an Army veteran, Kevin continues to serve his fellow veterans and those transitioning out of the military,” said Robin Kelleher, Hope For The Warriors co-founder and CEO. “Whether it be by volunteering, honoring his dear friends he lost while serving or through sharing his story of reaching out for support in hopes of connecting with another veteran in need. Kevin is an inspiration to all.”

Thank you, Kevin, for your dedication and commitment to our nation’s service members, first responders, and their families. We are proud to call you a member of the HOPE family and will be right there cheering you on as you take on your next adventure!